Oh does fate send me here.

I write good here. The best I can, I think. I miss it. I lost the password, forgot the name of the site, and didn't know which of my throwaway addresses I'd attached this blog too. But here I am. Don't know don't know don't know.

I lost my second cuz I needed to not have it for awhile.

And this one is over now, too. If you get any posts in your comments that seem to have been left by a girl who loved Death of a Salesman...check her out.

Not sure what to do. A while ago I linked to my friend's website, "Marriage Forward" in my blog, in support.

Not understanding the internet at all, it was only recently I found out that the link revealed my blog to her.

I told her I was a little wigged out that my blog wasn't anonymous anymore. She said in an email, "It can't be that anonymous! You always have comments on there!"

I don't know what to do folks. I'm hobbled. I have been trying to write some stuff and I keep censoring.

I made need to start over again.
posted by Imez at 3:32 PM 9 comments

For two weeks I have responded to all questions regarding my 400 level writing class at the university with, "I have faith. I am keeping an open mind." Today, as the first swell of the perfect storm, my mind finally hinged shut. Shut tight.

The professor kept scrunching up her cute face and saying sweetly, "I really don't know what this class is about. I mean, what is style? So we talked about reality tv shows that she liked to watch, and blue jeans. The "peer review" of our first essay was jumbly and loud, students handing their half-done rough drafts (Imez, with her heart invested, had a fully completed final draft, begging for impurt) to two or three others. No critique offered, save my peer reviewer's suggesting I indent more. Then the professor began playing a youtube clip on the movie monitor. I asked, "Are we supposed to stop peer reviewing and watch this? (This loud, enormous thing) and she said, "Huh? No. This is just something I'm curious about at Rutgers."

Today when she announced our next writing project would be redesigning the University's Writing Courses webpage, which, she giggled, was actually her job but we were gonna do it instead, I pulled open my new laptop (Sean bought me especially to further my writing) and began playing Jewel Quest.

I am done. I wanted this class. I had....hope. I saw doors opening. I was wrong. If I quit now I get a little money back.

I drove home to Obama's swearing-in on AM radio, and I got teary. Partially hormonal, partially the grieving of my academic mis-step, and partially because I wanted to believe in my leader. At home, soon after my arrival, Sean called anyone emotionally moved by Obama and his pointless rhetoric a "sucker," at which point I began to cry very hard. Sean tried to apologize but his hands near me made me want to fling my arms around to get them away. He was then angry that he wasn't allowed to express a political opinion in his own house, that I stifle him with emotional manipulation. He has a point there, except I really can't agree it was malice-aforethought, my crying.

I put Smudge down to nap and left for awhile. I came back, desperate for activity as foreign as possible. So I sat on the cold cement in the back yard with the instruction booklet and taught myself to use our still-in-the-box electric chainsaw. We had an ice storm before Christmas, our trees lost limbs and branchs. I am from the mountains and had never even seen an electric chainsaw. I have also never handled any chainsaw.

I was so proud to have it going. To have even included the bar oil, a product which I never even new existed.

I lost it. Black rage, screamed at Sean because who the fuck buys and ELECTRIC chainsaw. Screamed at how happy I imagined he was now, that I'd failed at one more thing. I was a failed writer, a politcal sucker, a failed student, a fatso, slovenly housekeeper, ugly, and now a failed fucking chainsaw operator.

He just stared, kept offering calming words that made me angrier and angrier. "I love you. I don't want to fight, I love you."

What happened between then and now I can't hardly remember. Except for watching different presidental inagriations on youtube and sobbing through all of them, even Harry Truman in a top hat. And that we had an awful awful day. And that it was really all my doing, just like Christmas.

Please, don't talk about Obama. I can't stand any more about Obama.
posted by Imez at 8:42 PM 13 comments

Trying, trying not to be a Plastic Fart Sniffer

We just opened a late round of Christmas gifts from far off relatives. I removed a pack of plastic food from the gift box, all modeled on McDonald's fast-food, labeled for my daughter. I...I removed it all the way to the garage. I just can't. I can't I can't. I hate cheap plastic toys. I hate advertising for any company without being paid to do so. And I hate myself when I feed my daughter McDonald's food.

The first time I encountered the concept of trying to keep plastic out of your child's life, or at least her toy box, was in the sweet and savage periodical known as Mothering Magazine. I thought the idea brilliant, full of integrity. I remembered playing with Smudge's much more hip little cousins before she was born, and the broken plastic toys lay like shrapnel around their house. Single use toys. Like a kleenex, but so much sadder.

In Mothering Magazine I read the testimony of parents who strictly adhered to the rule. They wrote about the hard plastic, talking doll someone had given their daughter for her birthday, and what fun they had desecrating that symbol of commercialism and stringing it up as a scarecrow in their Peace Garden.

I came across the very same article four years later, after having Smudge, while shelving at the library. I sat down and reread it. Mostly. Actually I closed it, snorted at it, and put it back none to gently.

Someone loves that little girl in the article enough to give her a present. Someone walked the aisle of a store, held that child in their mind, and pictured her smiling and hugging a new doll. They paid for it, probably a lot, too, from the sound of it, wrapped it and delivered it. And that is worth precisely...shit? to the Mothering Magazine people. And I don't know what a "Peace Garden" is but just the sound of it sort of pisses me off.

The article is filled with indignant disappointment at family member's failure to purchase and deliver the correct gifts to the Mothering's mother's precious little snowflakes. I have felt that disappointment creeping into me...and that article made me ashamed of it.

Ah...but what about my precious little snowflake?

I am so terribly proud of the presents I got my daughter this Christmas. A Bozo clown, (plastic, but forgiven for being so wonderfully creepy) a cobbler's bench, drums, and a elegant, tiny little red piano. And, a Bilibo, completely plastic but with good reason.

And I love the person that sent the McDonald's pack. And dammit, I know they love Smudge so much. I also know they have a dozen people to buy Christmas for on a tight budget, and I know that, unlike me, their heads aren't shoved quite far enough up their butts to weigh libertarian integrities when buying a little baby a fun gift.

So they sent the McDonald's pack. It bothers me on near every level, as a toy for my daughter.

I don't want to be the Mothering Magazine fart sniffers.

I'm writing a thank you, and I mean it, thank you. Thank you for loving her, thank you for the effort. But I'm giving it to Goodwill, unopened.

That is my problem, my deal, not theirs.
posted by Imez at 7:02 PM 8 comments

No, actually, my Christmas wasn't entirely good. The day, the actual day. I fucked it up a bit.

I don't know why. Sean said he would but didn't make his crepes, and it seemed such a blight on the happiness. Happiness just doesn't happen. Someone has to build and carry it. I carried it for weeks leading up to that day.

But that was just a tiny puncture through which 1000 pounds of pressure was seeking escape. Maybe I was going to melt down no matter what.

I spent a good portion of Christmas afternoon driving deep as I dared into the woods, then trespassing in fields of mud and snow crust. Screaming, crying, hating, all these things with no object. I came home and made a Christmas dinner, but it felt so pointless, the three of us, not talking around the table. I wasn't better till the next morning.

All this time later I still don't know what happened.

Tomorrow I'm taking a class. A 400 level composition class at the university Sean works at. It is not grad school, but it is real and it is progress and the universe handed it to me.
posted by Imez at 12:18 PM 8 comments 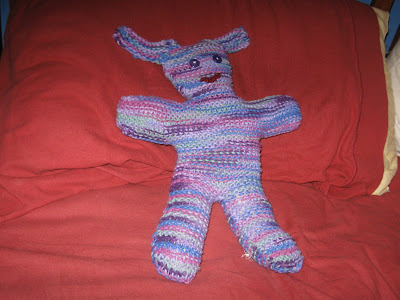 Oh does fate send me here. I write good here. The... I lost my first blog and blogger identity when I, ... So. Not sure what to do. A while ago I linked to ... Fuck Trying, trying not to be a Plastic Fart Sniffer No, actually, my Christmas wasn't entirely good. T... Ploppsy Killed a Drifter..... It's Christmas Eve. I'm just so happy. I should wr... She meant nothin' baby, honest. MySpace. Avoided, so long...though...it was lame....